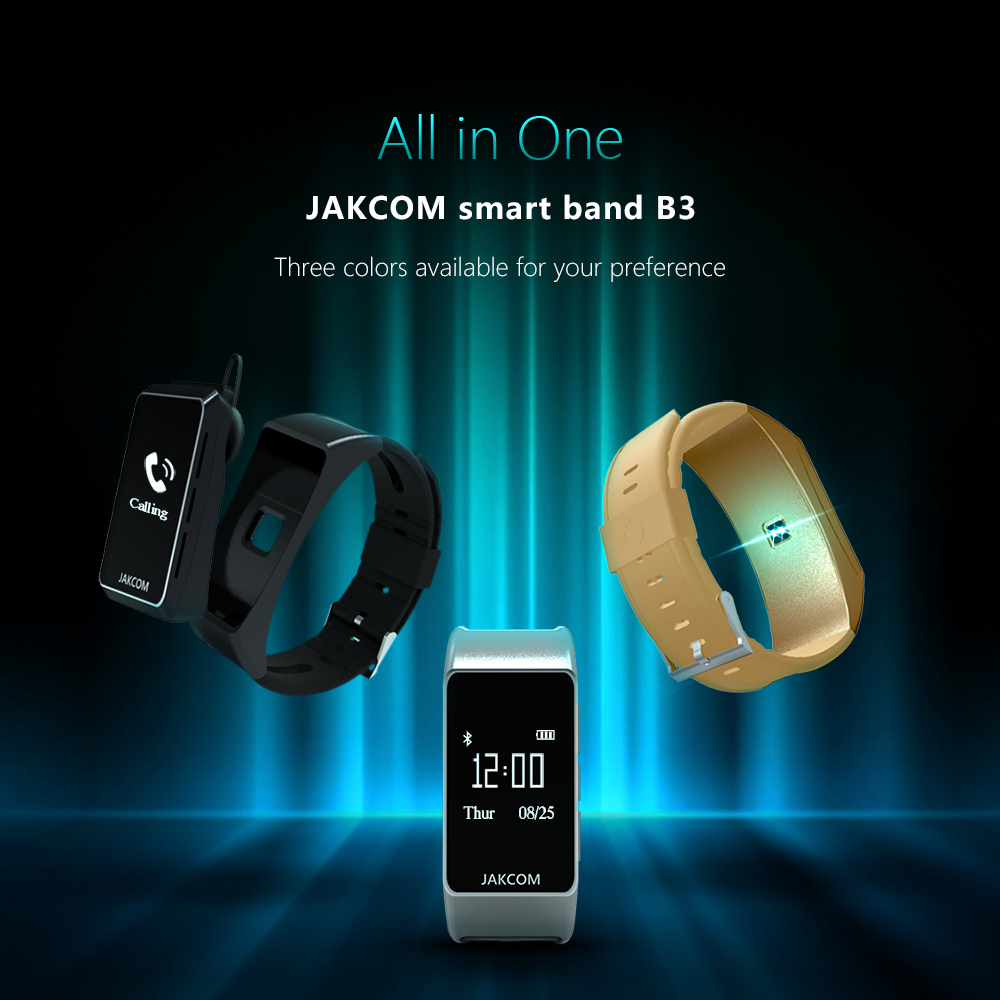 Three colors available for your preference 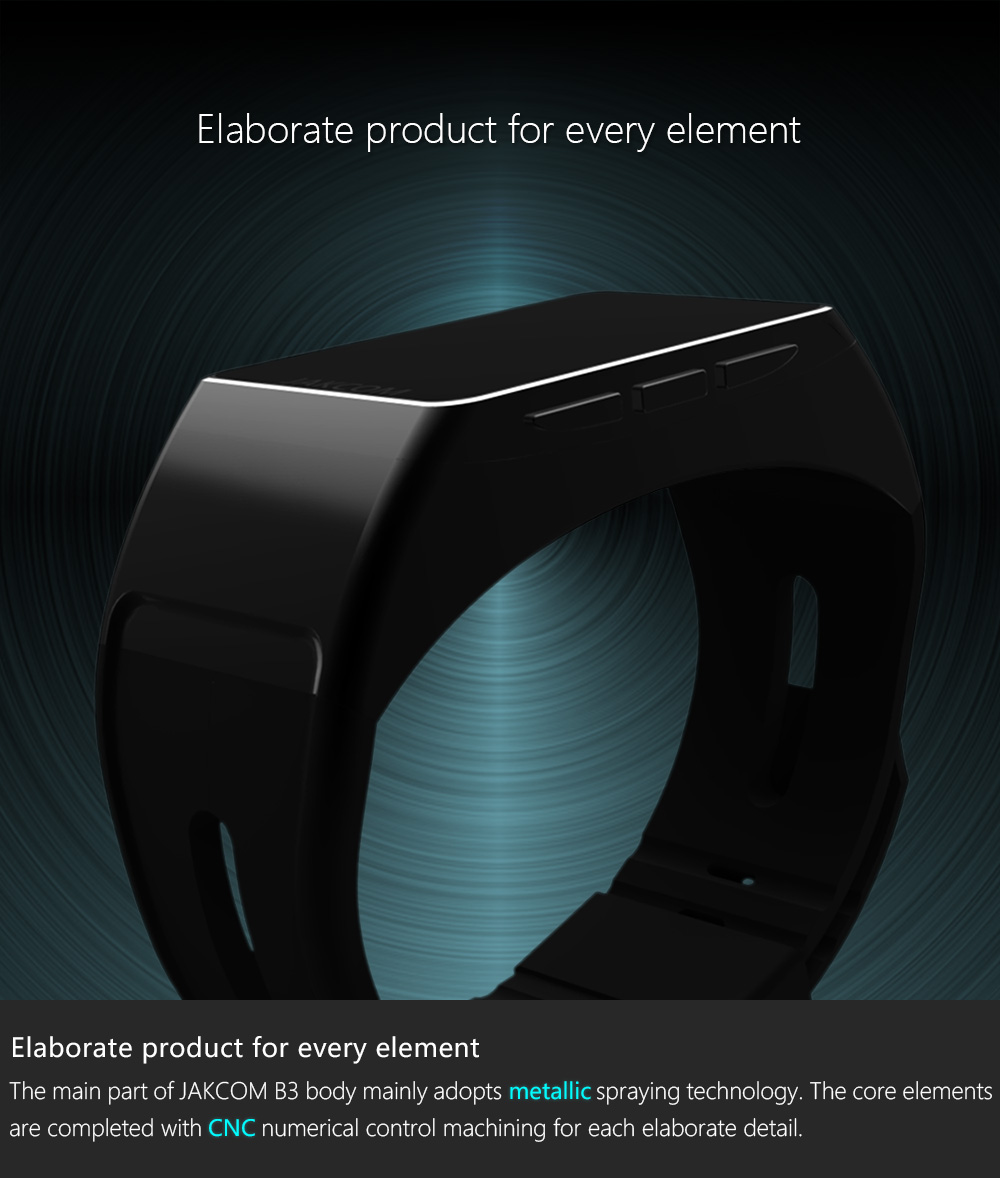 Elaborate product for every element

The main part of JAKCOM B3 body mainly adopts metallic spraying technology. The core elements are completed with CNC numerical control machining for each elaborate detail. 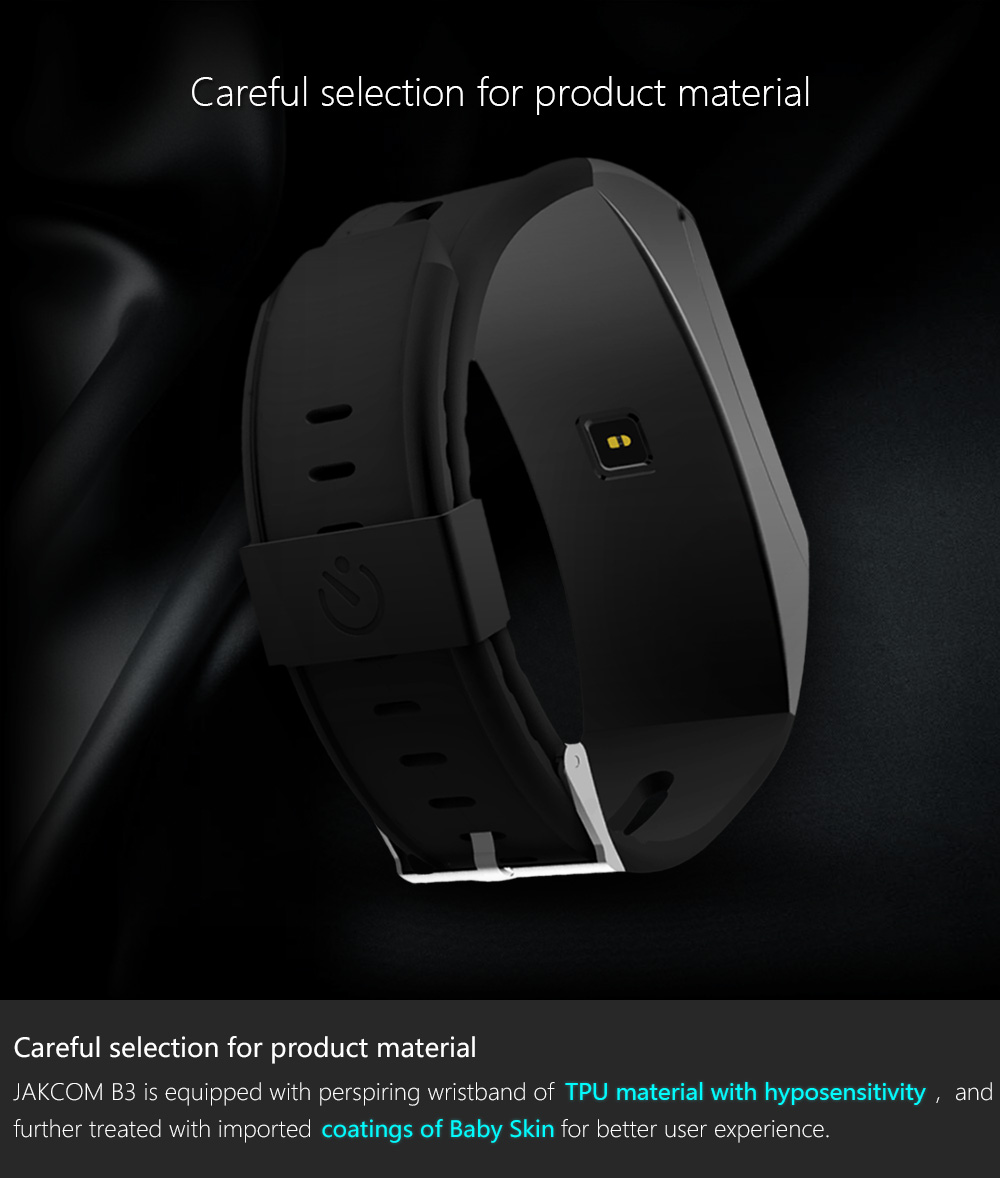 JAKCOM B3 is equipped with perspiring wristband of TPU material with hyposensitivity, and further treated with imported coatings of Baby Skin for better user experience. 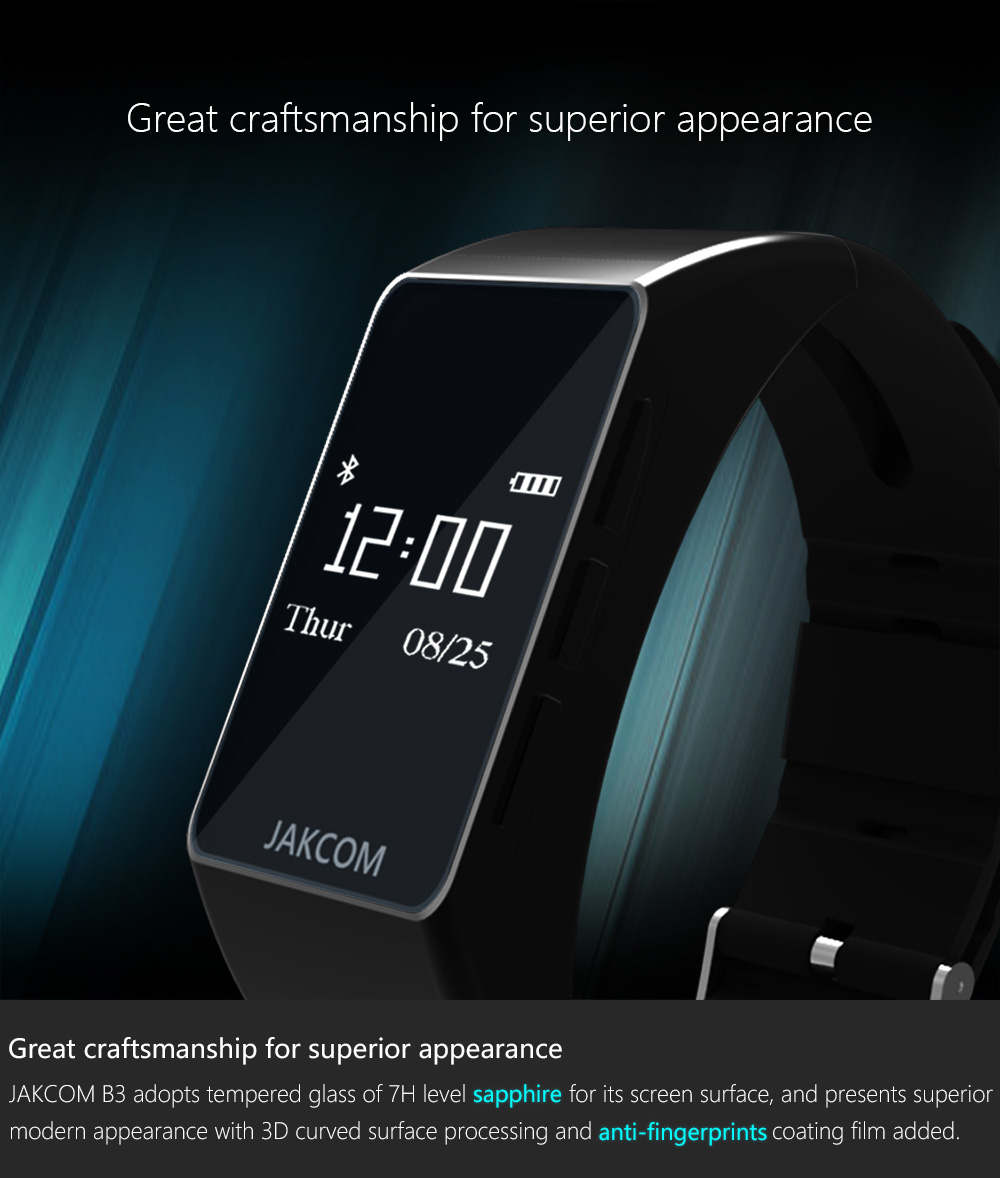 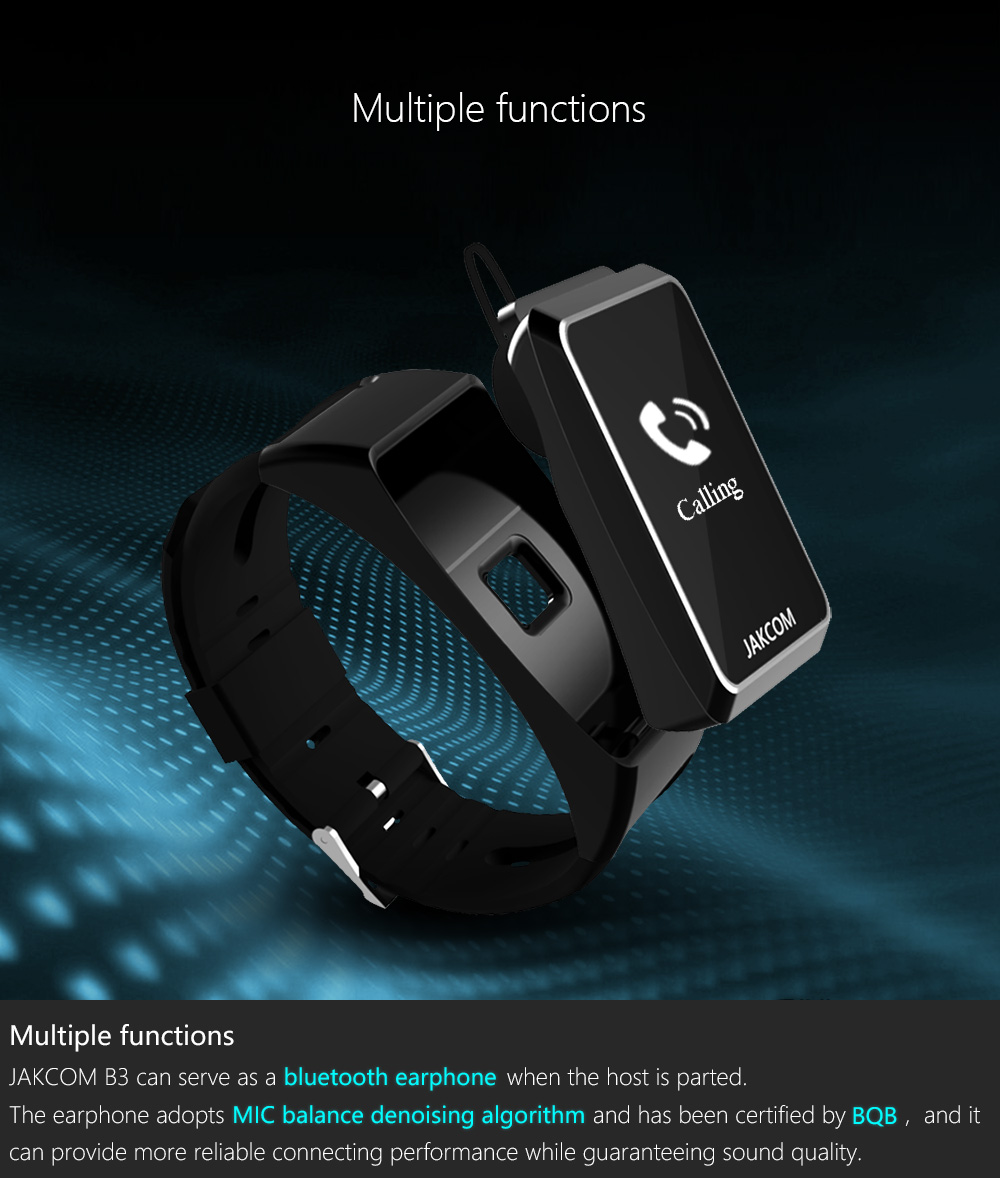 JAKCOM B3 can serve as a bluetooth earphone when the host is parted.

The earphone adopts MIC balance denoising algorithm and has been certified by BQB, and it can provide more reliable connecting performance while guaranteeing sound quality. 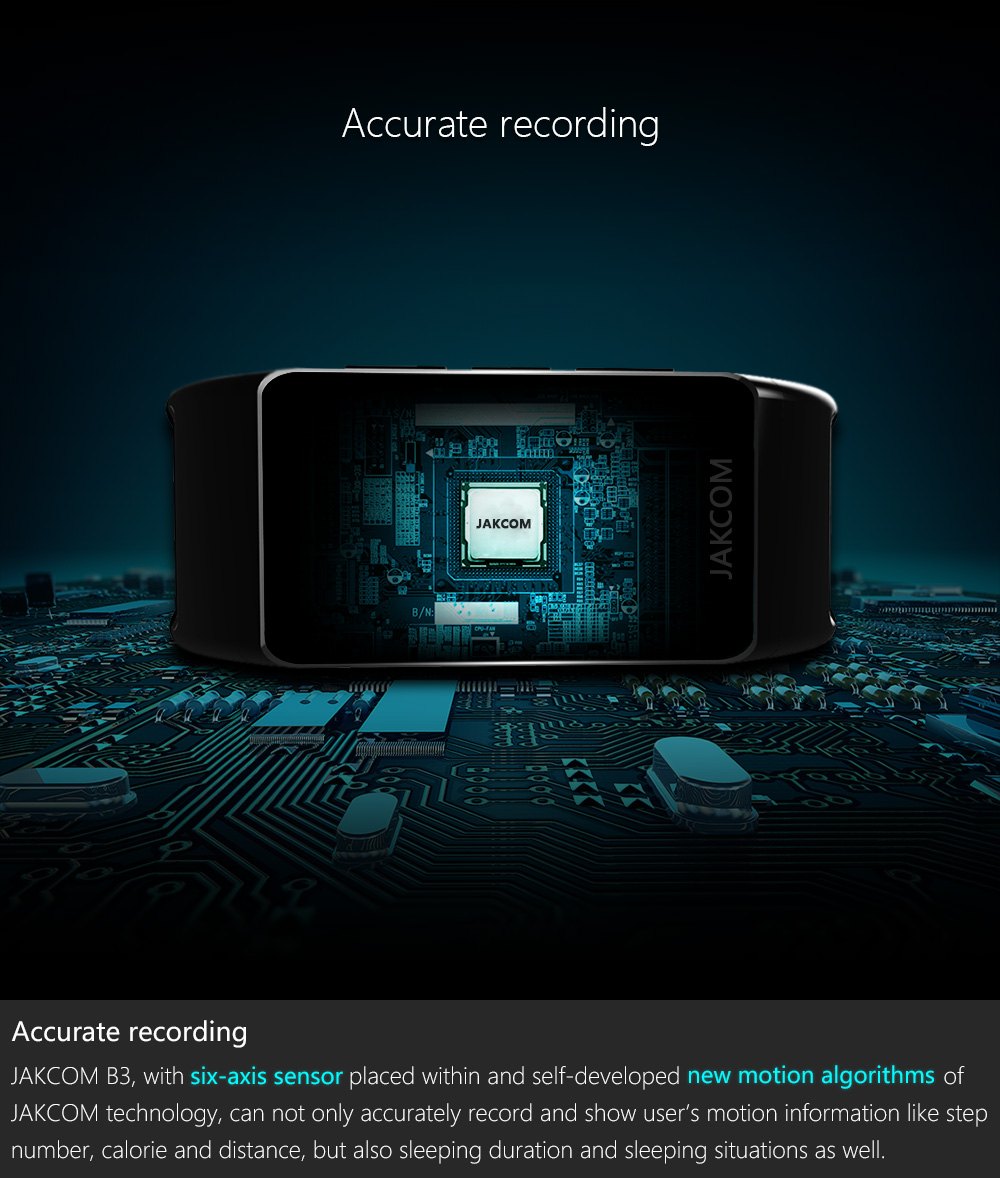 JAKCOM B3, with six-axis sensor placed within and self-developed new motion algorithms of JAKCOM technology, can not only accurately record and show user’s motion information like step number, calorie and distance, but also sleeping duration and sleeping situations as well. 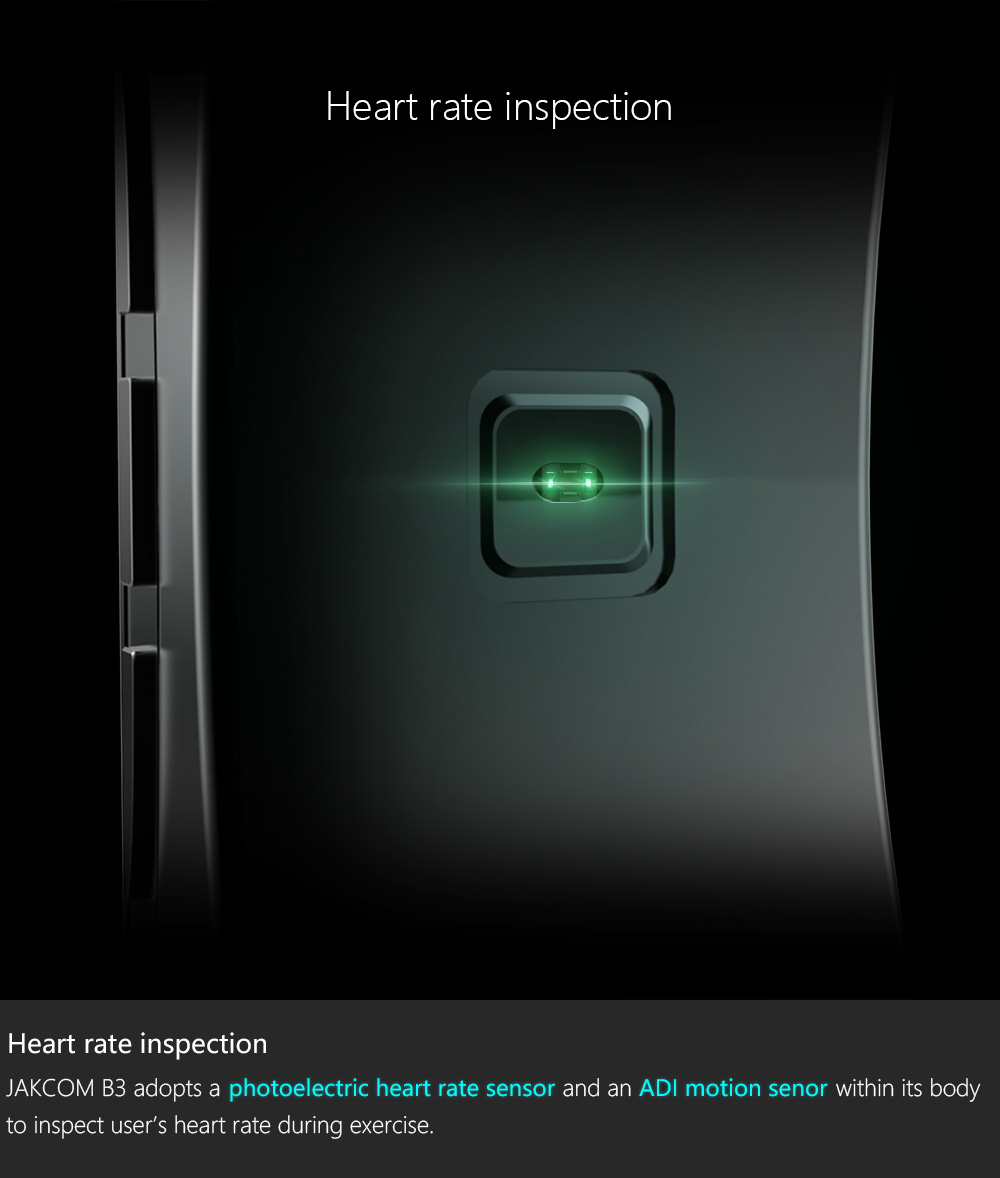 JAKCOM B3 adopts a photoelectric heart rate sensor and an ADI motion senor within its body to inspect user’s heart rate during exercise. 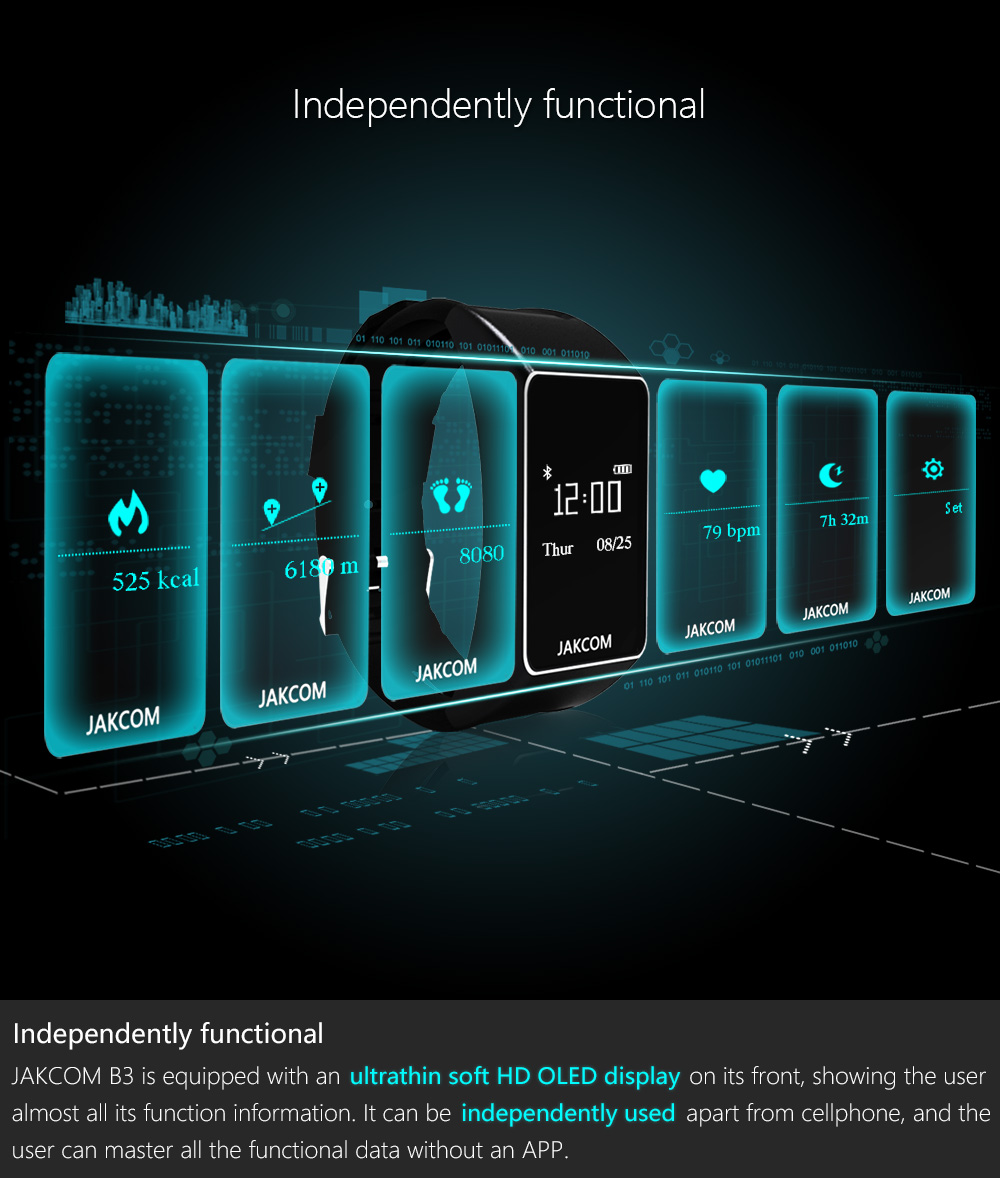 JAKCOM B3 is equipped with an ultrathin soft HD OLED display on its front, showing the user almost all its function information. It can be independently used apart from cellphone, and the user can master all the functional data without an APP. 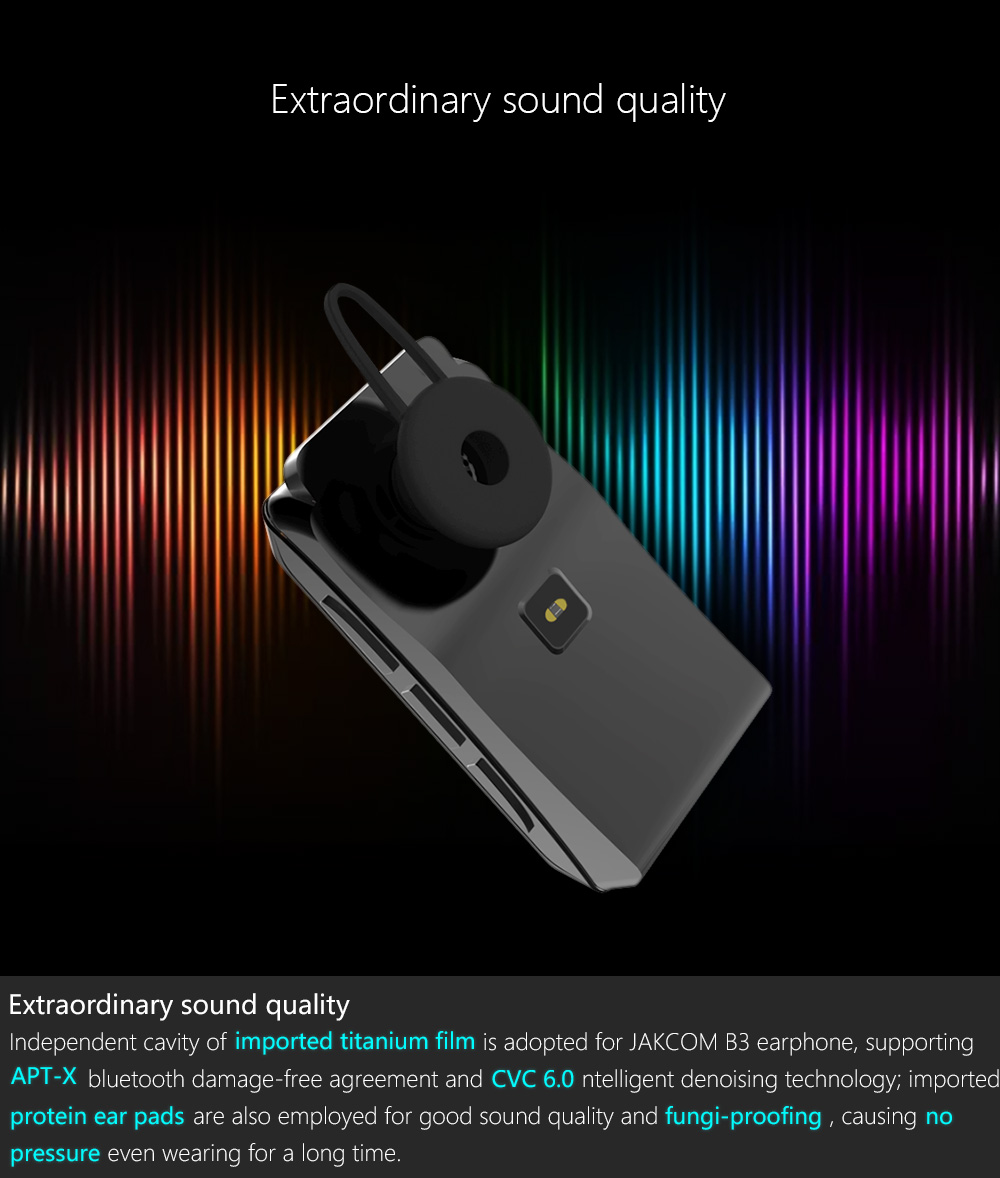 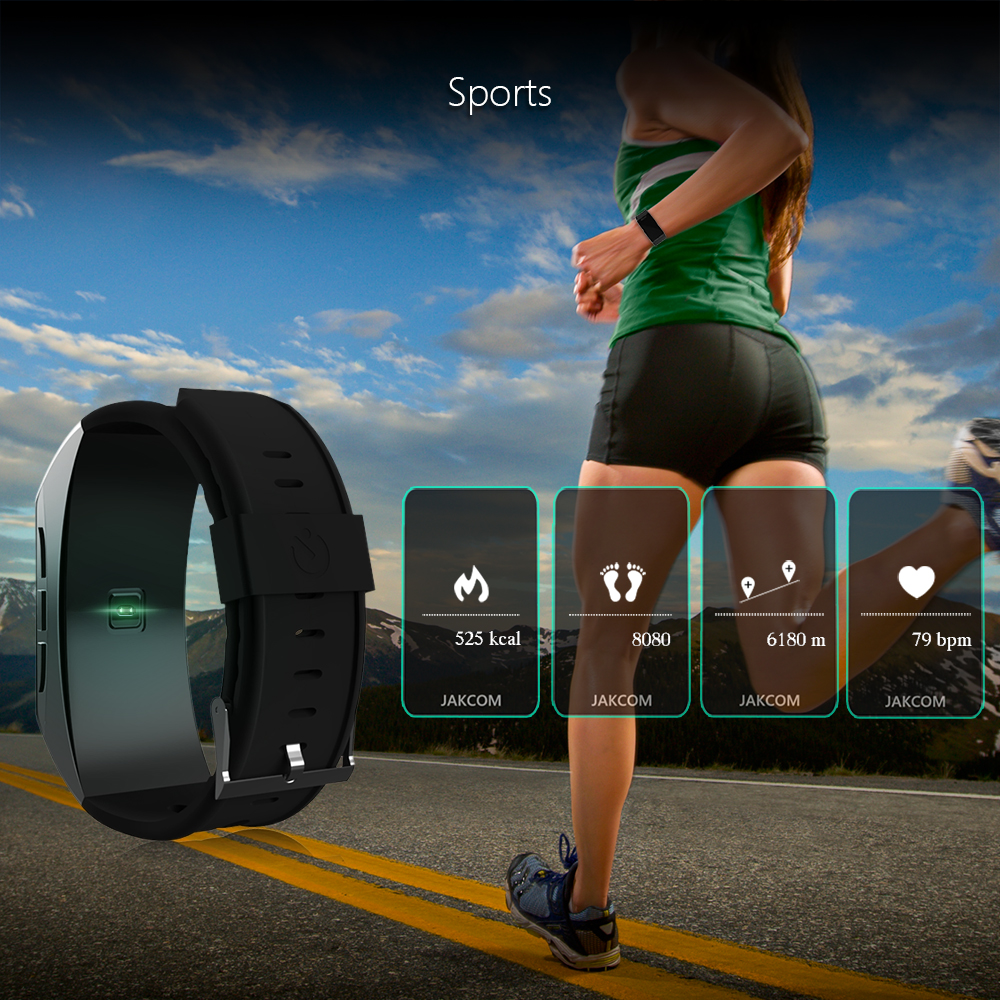 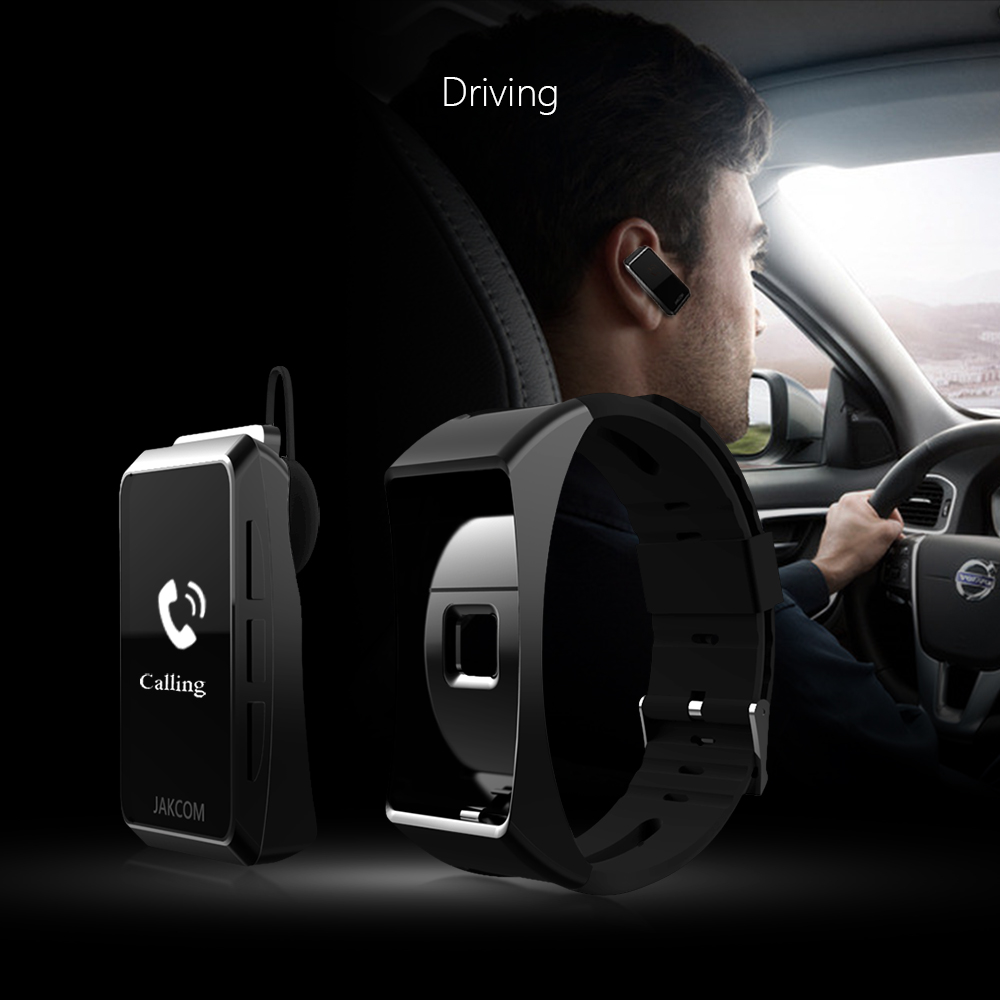 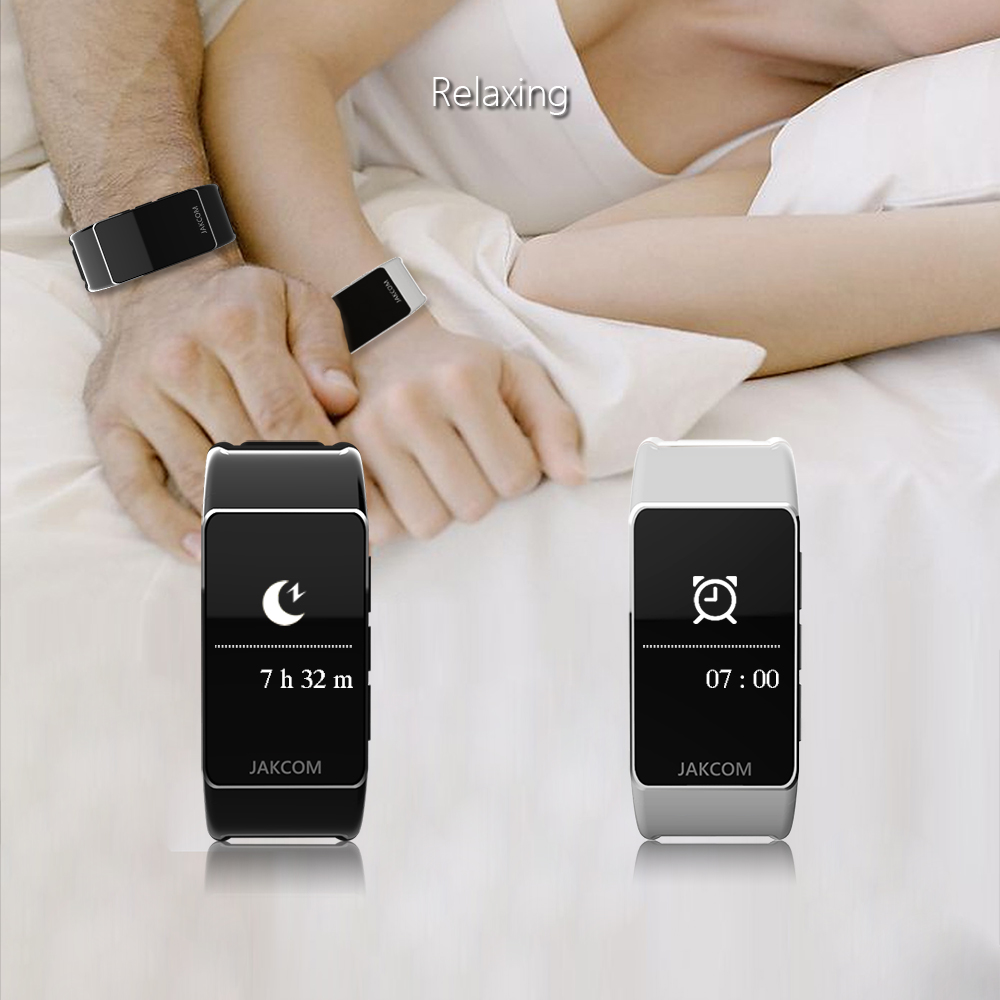 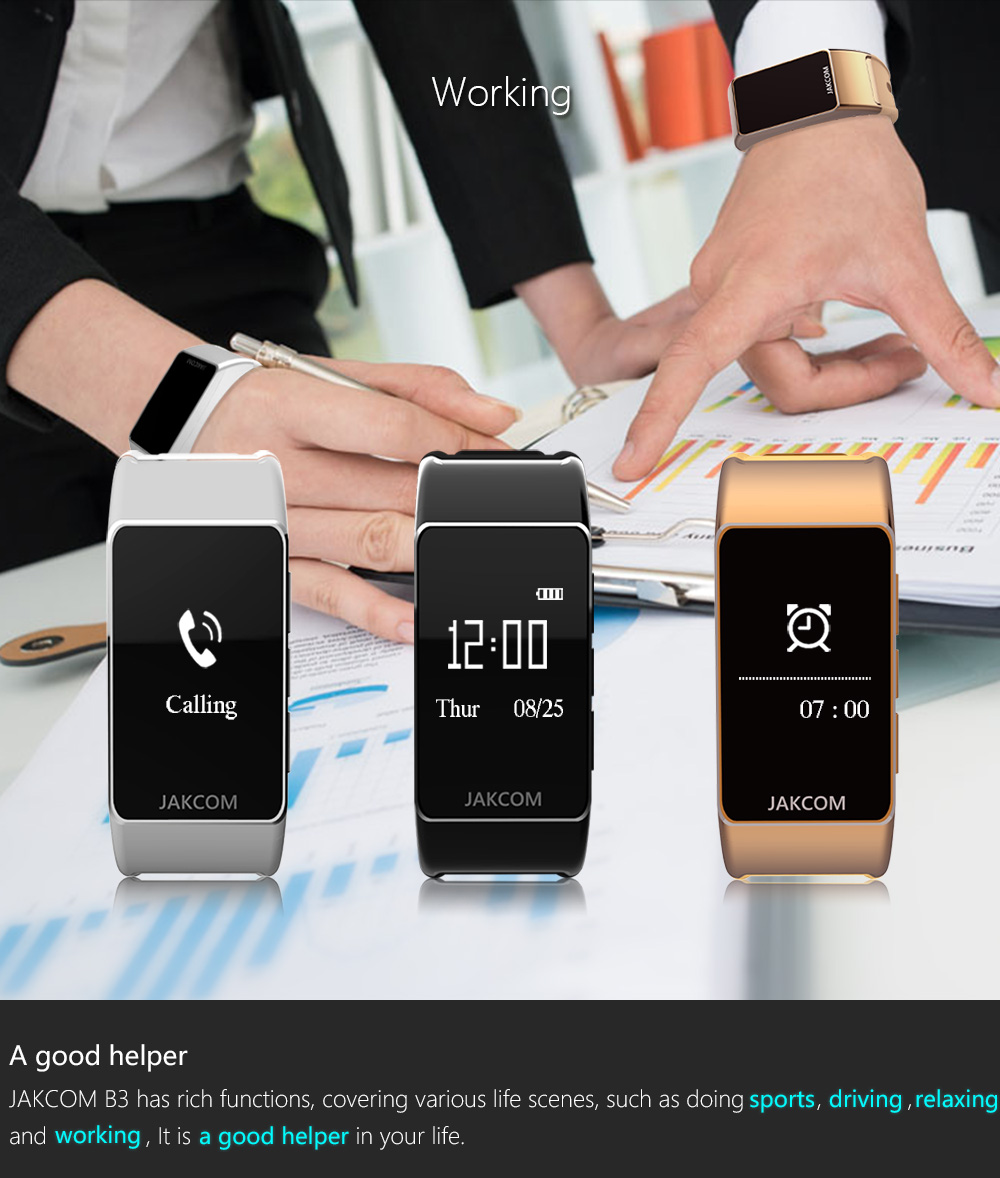 JAKCOM B3 has rich functions, covering various life scenes, such as doing sports, driving, relaxing and working, It is a good helper in your life. 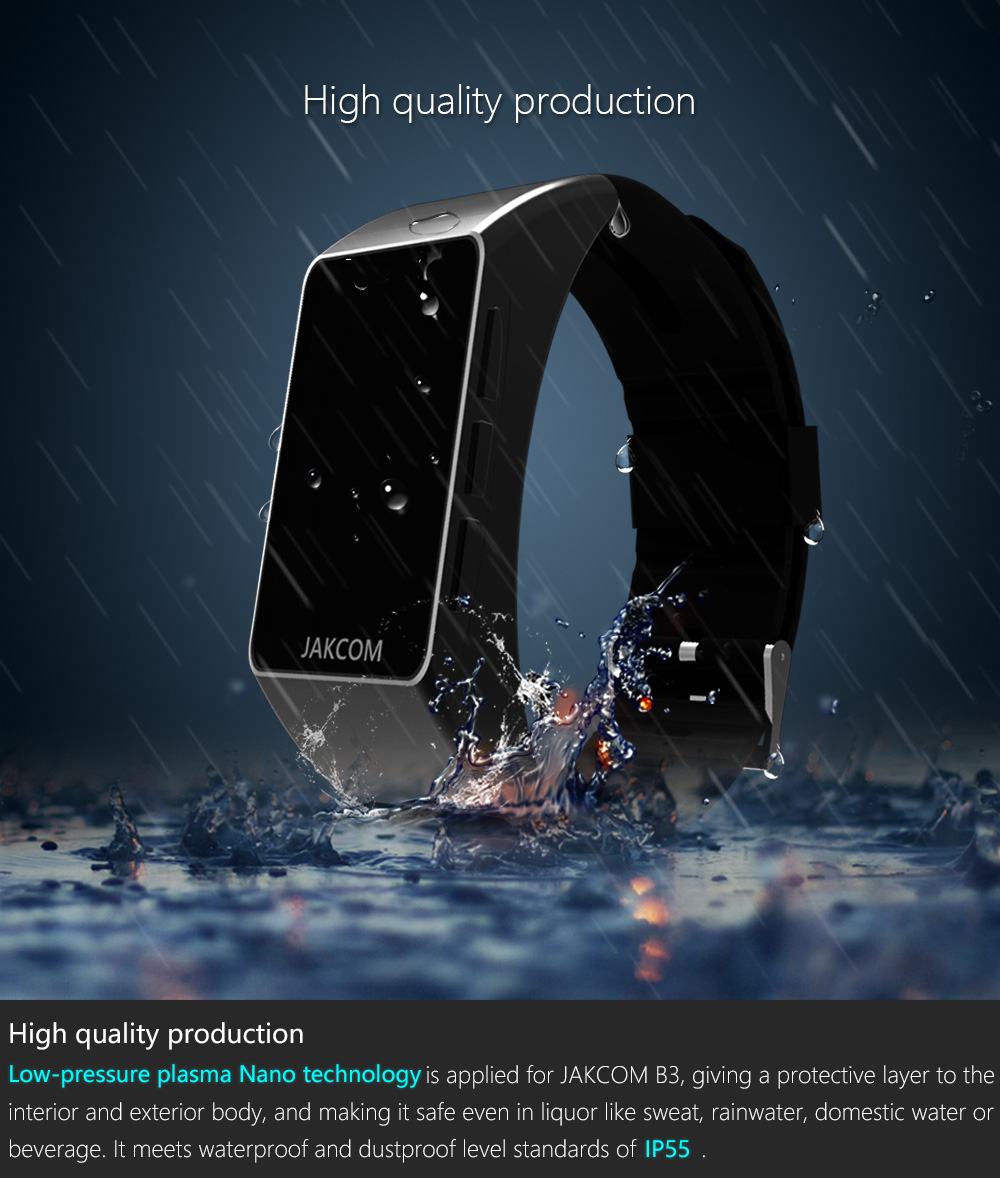 Low-pressure plasma Nano technology is applied for JAKCOM B3, giving a protective layer to the interior and exterior body, and making it safe even in liquor like sweat, rainwater, domestic water or beverage. It meets waterproof and dustproof level standards of IP55. 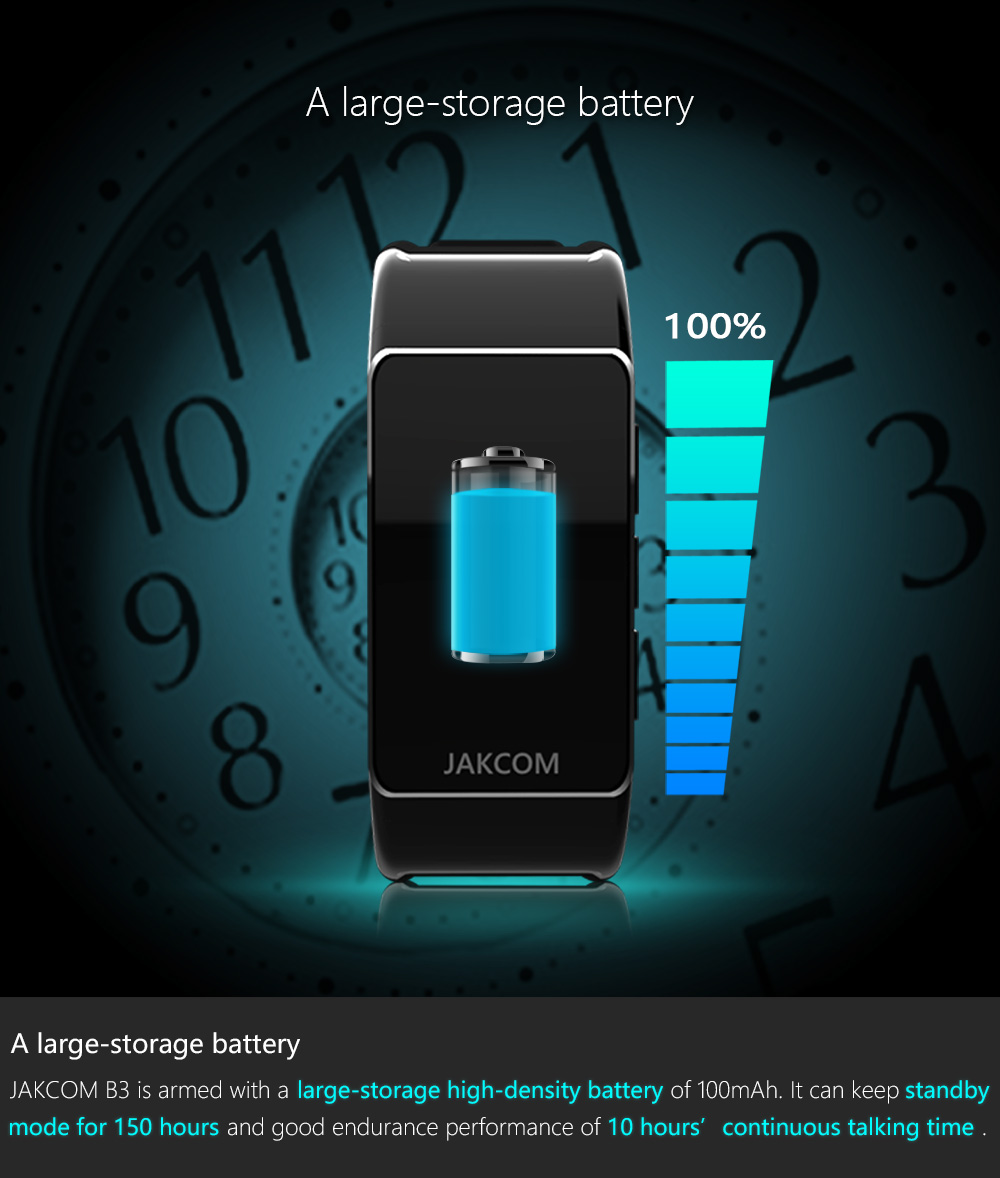 JAKCOM B3 is armed with a large-storage high-density battery of 100mAh. It can keep standby mode for 150 hours and good endurance performance of 10 hours’ continuous talking time.

We are proud to offer international shipping services that currently operate in over 200 countries and islands world wide. Nothing means more to us than bringing our customers great value and service. We will continue to grow to meet the needs of all our customers, delivering a service beyond all expectation anywhere in the world.

How do you ship packages?

Packages from our warehouse in China will be shipped by ePacket or EMS depending on the weight and size of the product. Packages shipped from our US warehouse are shipped through USPS.

Do you ship worldwide?

Yes. We provide free shipping to over 200 countries around the world. However, there are some locations we are unable to ship to. If you happen to be located in one of those countries we will contact you.

We are not responsible for any custom fees once the items have shipped. By purchasing our products, you consent that one or more packages may be shipped to you and may get custom fees when they arrive to your country.

How long does shipping take?

Shipping time varies by location. These are our estimates:
*This doesn’t include our 2-5 day processing time.

Do you provide tracking information?

Yes, you will receive an email once your order ships that contains your tracking information. If you haven’t received tracking info within 5 days, please contact us.

My tracking says “no information available at the moment”.

Will my items be sent in one package?

For logistical reasons, items in the same purchase will sometimes be sent in separate packages, even if you've specified combined shipping.

If you have any other questions, please contact us and we will do our best to help you out.

All orders can be cancelled until they are shipped. If your order has been paid and you need to make a change or cancel an order, you must contact us within 12 hours. Once the packaging and shipping process has started, it can no longer be cancelled.

Your satisfaction is our #1 priority. Therefore, you can request a refund or reshipment for ordered products if:

We do not issue the refund if:

*You can submit refund requests within 15 days after the guaranteed period for delivery (45 days) has expired. You can do it by sending a message on Contact Us page

If you are approved for a refund, then your refund will be processed, and a credit will automatically be applied to your credit card or original method of payment, within 14 days.

If for any reason you would like to exchange your product, perhaps for a different size in clothing. You must contact us first and we will guide you through the steps.

Please do not send your purchase back to us unless we authorise you to do so. 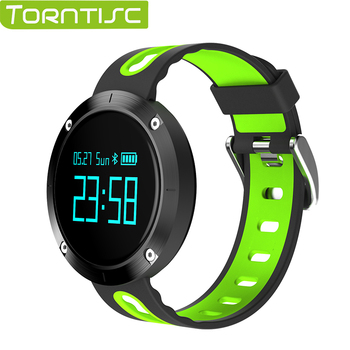 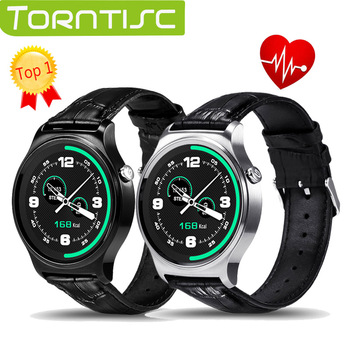 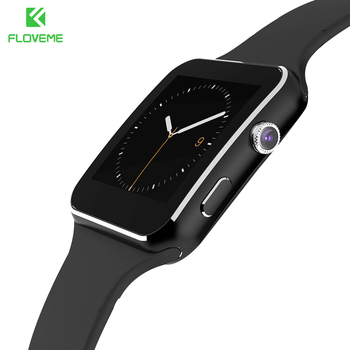 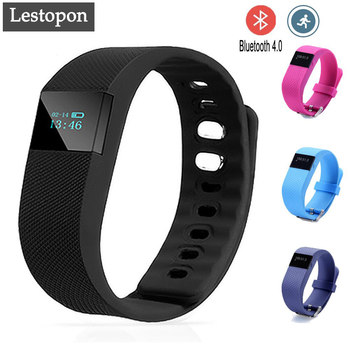 Very satisfied with my first purchase by the aliexpress, arrived in 15 days and was not taxed. very good!